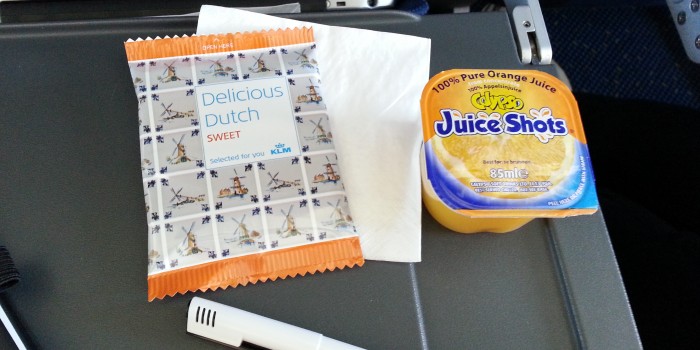 Ration pack issued by KLM in case the plane has to make a forced landing in the North Sea en route from Humberside Airport to Amsterdam. There are a number of scenarios when this happens.

Plane lands in sea and breaks up and sinks without trace or at least long enough and deep enough to drown all the passengers before they have a chance to put on their lifejackets and slide down the emergency escape chutes which haven’t deployed in any case.

Result: Unless the passengers in question have managed to consume the rations on their way down, which does seem unlikely, the said rations remain uneaten due to the untimely demise of all concerned.

Plane lands in sea but doesn’t break up. Passengers either remain on board, benefiting from the buoyant nature of the airframe or exit down the chutes and then stay afloat by treating the chutes as life rafts.

Result: Passengers scoff the snack and the drink and are probably rescued in reasonable time because it is a major air disaster and every ship in the North Sea will divert to the crash location. Some passengers may die as a result of not securing a place on the life raft but worse things happen at sea these things happen.

Plane has drifted way off course and is not actually over the North Sea. Fortunately the captain has managed to find his way to a remote desert island and brings the plane down safely in the water close enough to land for the passengers to all wade ashore. Those in business class make their way to one end of the beach where they establish their own little enclave complete with business class rations that include nice little salt and pepper sets though still only plastic cutlery due to safety concerns following 9/11. The captain joins the business class passengers, ostensibly as part of the service but in reality because given the choice between their food and the c&@p dished out to everybody else he opts to look after himself. The rest of us are allowed to wander off aimlessly to look after ourselves and find shelter wherever we can off the beach.

Rations of both classes of passenger are soon consumed including those in business class and despite the reality that their food too was not particularly edible.

Result: The rest of this story follows a number of possible well trodden paths that include massacre of all concerned by the cannibal tribes of the area, slaughter of most of the survivors by internecine war or the kicking in of a survival instinct along the lines of Swiss Family Robinson whereby everyone works as a team and builds a cosy shelter from the elements that serves as home until they are all rescued by a freighter that was also well of course and was putting in at the island to refill its water tanks.

PS the pen is superfluous to the story. It just happened to be in the photo.