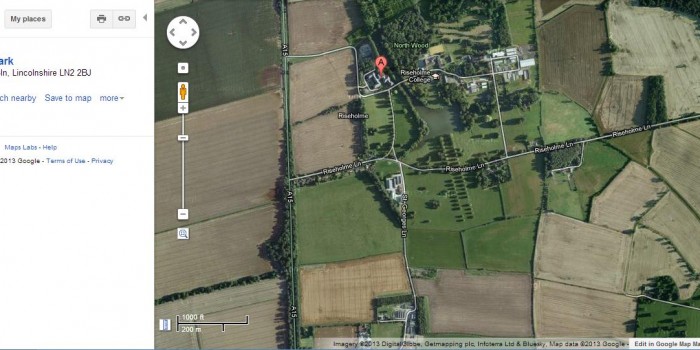 P2 is an interesting plot to cover. I was going to write about the fact that the Lincoln RFC junior rugby section trained there before the end of the cricket season made more of the Lindum ground available.

However in checking to see whether the rugby pitches were actually in P2 I came across far more interesting things to talk about.

First of all the A2Z map suggests that the park ends at Riseholme Lane. A look at Google maps in satellite view shows a long avenue of trees that cross the lane and beyond into territory not marked as Riseholme Park.

Clearly there was a time, when the park was laid out, when the grounds were more extensive than today. A quick Google reveals the following:

Riseholme Hall was built in the middle of the 18th century by the Chaplin family. Formal tree planting and the lake were already in place by 1779, but by the early-19th century the south park had become more informal. In 1840 the estate was sold to the Ecclesiastical Commissioners, to become the Palace for the Bishop of Lincoln. The hall and park were re-modelled and a new church was built.

The Bishopric (I assume there was more than one Bish in the time) was clearly still a powerful entity in Victorian times for the Bish to have such a large pad. Worra life.

Today the park forms the site of the Agricultural College of the University of Lincoln as well as hosting an Inland Revenue Training Centre.

Balls are sometimes held at the Hall. I once went as a guest to someone’s school bash but I have to say it was a dull affair. To save costs the entertainment was a jazz band put together by some parents and they weren’t particularly good! A second school ball but for a different school redeemed the place and on the hot summer’s evening we were able to enjoy the views of the park out across the lake.

That’s all for now. Tune in again for another Lincoln A2Z by Philosopherontap.