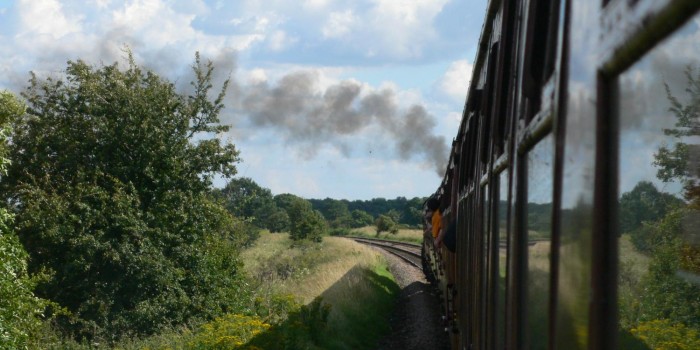 The age of steam. The romantic age of steam. We all wear the same rose tinted spectacles when we think of it. In fact the trains were slow and not necessarily comfortable. Today’s high speed trains are far more luxurious and get you there more quickly. The exception here being the toilets – the toilets don’t seem to have changed since Stevenson’s day. Notwithstanding this I prefer to put on those pink hippyish specs, probably heart shaped, and gaze wistfully back at the steam train. The one that went choo choo and chuff chuff chuff. More chuffs than choos is the correct format I assure you.

Various combination of kids and I have occasionally taken a trip on a steam train. Once we went to Scarborough on The Union of South Africa, the last commercial steam passenger train to leave Kings Cross Station. We weren’t on that trip. That was in the sixties I think, nineteen sixties. We were on a trip from Lincoln to Scarborough, except we weren’t. Turns out the line to Lincoln can’t handle the weight of the engine so we had to join the train at Doncaster, itself a station full of railway history. Apparently, I’m not sure what that history is but that isn’t part of the remit.

It’s a good job we weren’t on the train all the way from London because it does take ages. The trip to Scarborough stopping for water & fuel at York where we had to get off and walk around a little reminded me of the movie The Railway Children. One of my faves, together with Mary Poppins. As we were steaming chuffing and choo chooing through the countryside children would run to watch. Everyone would wave and we happily waved back, knowing that was our responsibility as the favoured ones.

I can’t remember what we did in Scarborough. A photo opportunity with the engine, fish and chips and an ice cream probably and then we turned around and headed back towards Doncaster.

Now what you need to know about this train is that it had only been given the go ahead to travel at 70 miles an hour. The Union of South Africa is a Nigel Gresley A4 Pacific. These were the ultimate in steam trains with a through tender that allowed a relief driver and fireman to pass through the tender to take over a shift at the front without having to stop the train. They were built for speed and The Mallard, which holds the world speed record for a steam train at 126mph is of exactly the same design as the Union of South Africa.

Considering this 70 mph seems a bit tame. However the Mallard had been towing far fewer coaches and was a new engine at the time, or at least only five months old. We were never going to make it close to the speed record so 70mph seemed fine.

During the trip it became noticeable how many hard core steam enthusiasts (ok nerds) there were on board. These were the people who had either brought periscopes or plastic face masks with them. These were needed because if you stuck your head out of the window you were showered in ashes and steam. You could therefore tell the nerd because he, they were almost exclusively male although they may well have had a female in tow, would have a blackened face with white bits where the face mask had covered the eyes.

As I was remarking, discretely, upon this to my lad one of the panda faces walked hurriedly through the train spreading the message, 75 miles an hour, 75 miles an hour! Clearly the driver had thrown caution to the wind and ignored the 70 mph imposed limit. We didn’t care. We felt great. We had been part of it and to hell with authority. Rebels all.

The train pulled into Doncaster as it was getting dark and the locomotive was unhitched to be replaced with a diesel. After all I’m sure the London bound passengers would be glad to make it home before midnight.

Shortly after that trip I bought a Hornby 00 Limited Edition Union of South Africa that to this days lies in its box in the attic waiting for some attention.

The carriages on the train really did remind me of the British Rail buffet serving curled up sandwiches. We settled for drinks and kit kats having, as you know, fuelled up in Scarborough.

I’m sure most of still very much think wistfully of the age of steam even though by now most of us will not have been around at the time. It’s a bit like when you hear the Lancaster Bomber or Spitfire fly overhead as we tend to do living in Lincoln. When you hear the magnificent roar of the engine you run outside and if you are luck catch a glimpse before the plane vanishes over the rooftops or trees.

The accursed trees, though I don’t really mean that. I quite like trees, especially oaks and other deciduous natives. I almost said decidedly native then but I didn’t so that’s ok. Innit? We have sycamore trees peering down into our garden which are a real nuisance come autumn as all their leaves seem to fall into our side of the hedge and not next door where they belong. Also in the spring we get little sycamore plants shooting up everywhere. Until that is they are cruelly killed off in their infancy by the indiscriminate scything blades of the lawn mower. I can hear it now, laughing cruelly as it cuts off the heads of the seedlings, nyahahahahahahahaaaaaaa.

Sycamore is not as good for burning on a log fire as is oak and doesn’t attract as much wildlife so frankly in my book the sycamore doesn’t have that much going for it.