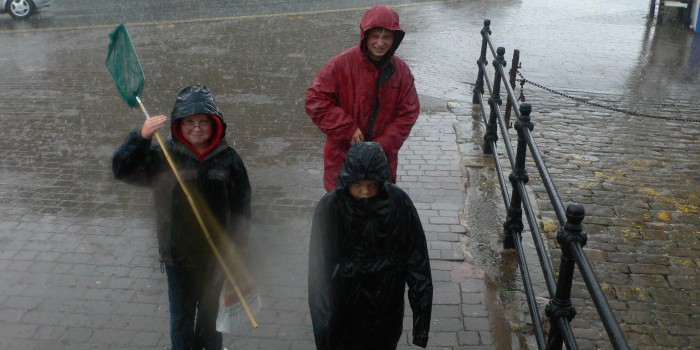 There is no tennis. It is all repeats. It is raining. We all look forward to the British summer. We get fed up with the winter.  We sit there dreaming of sultry days where it is almost too hot to do anything other than sit eating a picnic in the shade then dozing off to the gentle sound of the languid river lapping away at the bank. As the afternoon cools we wander back down the river path and find the pub at the bridge. Day turns into night and we stagger merrily home to our beds in preparation for the following lazy day.

In practice it is rarely like that. Just think of Wimbledon and the number of times you’ve seen Cliff Richard entertaining the crowd on Centre Court. Ok only the once and since they put the roof on they’ve not needed to call on his services but you know what I mean. That’s an expensive way of avoiding having to listen to Cliff Richard in my book. Would have been cheaper to send him on a package holiday somewhere distant. A Saga one probs! Could probably have a whip round from people with Centre Court debentures to make sure he doesn’t come back the following year.

Now I know this line of reasoning isn’t going to be universally popular. Cliff has many fans. I don’t mind the lad but his stuff is a little clean cut for my liking. Mind you one of my favourites is “Those Were The days” by Mary Hopkin. Both Cliff and Mary have a Eurovision Song Contest pedigree. When I was a kid we used to have a chance of winning. Not any more. I don’t even watch it nowadays. Don’t really watch much TV.

Anyway I’m wandering off the subject with was British Summer Weather. The tennis in question is Queens which is the warm up tourney to Wimbledon. Not being the mega institution that is Wimbledon the folk at Queens can’t afford a roof. I think it would be a bit over the top anyway. Geddit? I’m pleased with that oneJ

It’s a funny thing the whole issue of being pleased with yourself. It’s ok being pleased in private but I suppose you have to suppress your visible self-pleasure, if that’s the right way of putting it, when in front of others. I guess when it is expressed as the written word and being read by someone who is not in your presence at least you are not around to feel embarrassed. Maybe you wouldn’t be embarrassed. I’m probably talking right out of turn here.

Thinking about it I wouldn’t be embarrassed myself. No idea where I got the idea from. I’m sure there are loads of other things that one can be embarrassed about. Going out with no clothes on for example. Not that that is likely to happen, especially in the UK in Summer. It is too cold and you would notice that you had completely forgotten to put any clothes on doh – puts palm to forhead having previously raised eyebrows.

I can’t say I’ve ever gone anywhere and forgotten to get dressed first. I’ve forgotten to get shaved. Probably done that more than once. I once forgot to drop one of the kids off at nursery school and was half way between Lincoln and Newark before I remembered. We even forgot Tom at home when the family went down to a photography studio for a bit family photo. We took three cars and assumed he was in one of the others.

Only realised when we were all there posing as a group and someone said “where’s Tom”. I had to bomb back to get the lad. I’d set the alarm and everything before leaving the house so when he came downstairs he set it off. Our Tom has always had his head screwed on and even at the tender age of whatever it was he managed to put the code in to disable it. All’s well that ends well and we got the family photo. It’s hanging up in the house somewhere along with a million others.

Actually we haven’t got a million photos. We wouldn’t be able to get anything else in the house if we did. Ourselves even. Not much point having a house in that case. Might just as well call it a self storage unit. These days a million photos would fit quite neatly into a 4Terabyte or so hard drive. Obviously it depends on the size of image file. I assumed most would be around 4.5Megs with some being smaller because they were taken with an older camera with fewer pixels. I’m boring you here.

You have to promise me that if I appear to be droning on a bit you’ll tell me. I don’t want to develop the reputation of being a bore. Zzzzz. If I am boring you I’ll just have to talk to myself for a bit. At least I appreciate my own jokes. Not stand up roll around holding your stomach because they were so funny jokes. Just intelligent witticisms from a lively and inventive mind. That’s ma story and I’m sticking to it. If you tell them something often enough they will start to believe it. Whoever they and it are. Innit.

I’ve noticed myself lapsing into the vernacular on occasion. Innit, wtf, probs, loosa even. Yer mother works at McDonalds was an early one the kids learnt at school. Useful stuff instead of all this readin ritin and hard sums. At this point I should make it clear that references to mothers working at McDonalds are in no way intended as a sleight on your mother or McDonalds. I quite like your mother 😉 and McDonalds.

My fave is a large Big Mac with diet Coke though it never really fills you as a meal. I also like KFC but I always feel crap after one of those. A KFC is something that tastes great whilst you are eating it and then greasy and ‘orrible afterwards. Also I suspect the chips fries aren’t as good as McDonalds though you need to make sure they are fresh at either.

How on earth we got to talking about fast food I don’t know. That’s the 3rd Law for you. It’s a law unto itself, as they say. They don’t specifically apply that saying to the 3rd Law. I just did it myself. Because I can. You need to appreciate that sometimes when I give you something it is because I can and not because it is written down somewhere. Life would be a bit boring if it had to be run according to what was written down.

Ok society has to have rules for it to function and in fact I typically won’t do a job at home unless it is written down but in general it is better if you act as a free agent. The open road lies ahead. Chose to go down it. Don’t look back. Just go…