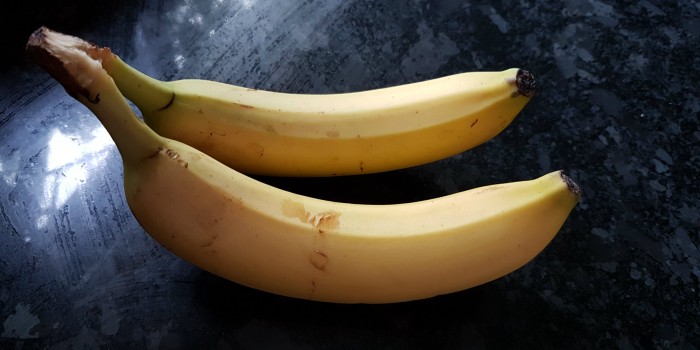 If I had a favourite fruit it might be the banana.

I am sure that somewhere in my past the banana sandwich has played its part. It is something I should probably revisit. Buttered crusty white bread with ripe bananas.

The banana is a versatile fruit. Banana pancakes, banana split, banana daiquiri spring to mind. I’m sure there are other fine recipes. When the kids were small we used to mash up bananas for them.

Barbecued bananas are great with brown sugar and brandy or chocolate. Add lots of double cream.

All my life I’ve peeled the banana from the stem end but someone in the family noticed an ape in a TV nature programme peeling it from the other end. Hmm. I’m not sure I can change the habit of a lifetime at the tender age of 54 ¾.

The banana skin has always been associated with slipperiness. This is a valid representation if a little unfair as no other fruit has appears to carry this burden despite some having the same slip quotient (new term – no point in looking it up).

Bananas in the shops nowadays tend to be greener and you are required to ripen them at home.

There is no point in buying too large a bunch at any one visit as they won’t all be eaten before they start to go off.

Some songs are based on bananas. Yes we have no bananas. The banana boat song. Two that spring to mind (all I could think of actually).

A fruit bowl is incomplete without a bunch of bananas.

There was (is?) a pop group called bananarama.

According to Wikipedia Bananas are an excellent source of vitamin B6 and contain moderate amounts of vitamin C, manganese and dietary fibre. Note the change of Wikipedia’s incorrect (American) spelling of fibre to the correct version.

The leaves of the banana plant can be used as plates for the eating of food and also as roofs of improvised shelters when shipwrecked on remote tropical islands.

Featured image: a duo of bananas on a black granite background.

Posted on September 24th, by Trefor Davies in the art gallery.
No Comments
0
Tweet