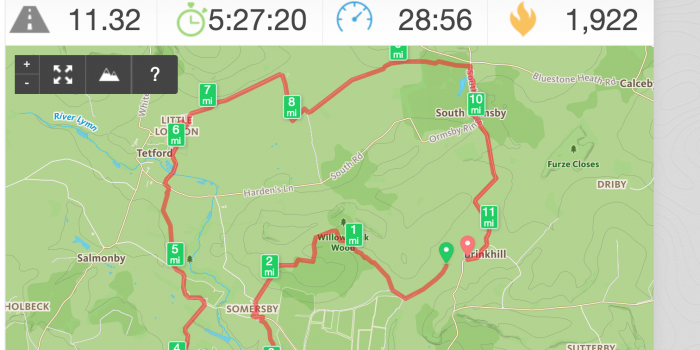 it must be a walk in the Wolds

Fry up this morning before kitting up ready for the walk. Adie tells me it is only a stroll really but that is fine. Still need the right gear. John has Radio 1 on in the kitchen so I am out of the way in the TV room whilst he has breakfast.

Still got the cough but there is a scenario that the walk will kill it. Of course the opposite may happen and I could end up in bed this afternoon:) Bought new inners for my boots. See how they go. Going to slap some Voltarol gel on before I head out which combined with the new inners will hopefully sort out the sore feet problem.

All set now. Right gear retrieved although I can’t find the pouch for the Leatherman. Am unlikely to actually need the Leatherman but it’s one of those boys things. You never know when you are going to need to saw up a tree that has fallen across the path etc. Flask of tea made, 2 cliff bars packed. They went out of date at the end of September but I’m sure they will be fine:) Don’t have owt like crisps in but I understand we could end up at a pub for lunch so that is not a problem.

Will post this before I go and take pot luck that I’ll get some decent pics en route for a featured image.

Brilliant concert by Erv last night btw. Fundraiser for ADHD before he goes on tour to China. I left at half time because of my cough but the bit I heard was great. Erv puts an enormous amount of emotion and physical effort into a concert. Told me once he rehearses for up to 10 hours a day for six weeks before a big gig. China will be exhausting for him.

Back at 5pm from a longish walk in the wolds. As distances go it was roughly the same a the shortest days on the Coast to Coast but it was hard enough seeing as I hadn’t walked for some months. The Voltarol gel worked for the first few hours but as the effects wore off my feet grew sore. I wasn’t going to remove the boots to slap on more gel though.

We did have a comedy moment. Stopped for a very pleasant lunch at the White Hart in Tetford. It was Alfred Lord Tennyson’s local and near Adie’s dad’s church – he was the last vicar of the area. After lunch we walked on and Adie soon realised it had been a mistake not to use the pub’s toilet facilities. We aren’t talking weewee here. Eventually we arrived at another pub – the Massingberd Arms in South Ormsby. Unfortunately that was closed. Adie manfully soldiered on until we came across a vacant house that was having some building work done. Out the back was a portaloo for the builders. After knocking at the door to ascertain that noone was in Adie made use of the portaloo.

After that the pace picked up and we made it wearily back to the car for 4.15 and home by 5.

All the pics here.

Posted on November 11th, by Trefor Davies in chinks.
No Comments
diary
0
Tweet