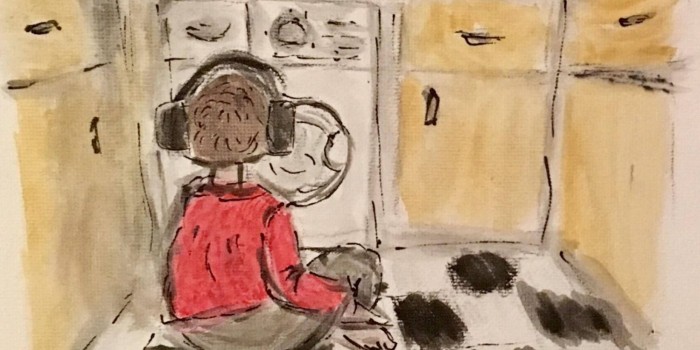 Things that spin are fascinating. I have long pondered why both my children, and my (ex) cats would just sit and watch the washing machine.

The changing colours and images as your eyes try to make sense of what’s going on.

“Why do the wheels of the cars on television sometimes go backwards daddy?”

I always thought it was the perfection of a circle that draws us in. But the clothes drop and move in random patterns, the wheels spin and glitter as speed changes, so its not perfection its the imperfection we watch and long for.

Never ending or beginning, on an ever spinning reel*

Its the constant change you look for. it never ends. On and on and on every spin is a new imperfection and you look for and start to anticipate the next one. Then eventually, if you can sit, you just see, nothing else, your mind can drift and wander and ponder, all the things that you, perhaps don’t find time to think of normally.

I don’t think adults sit and stare. I have no evidence for that I’m just guessing. And any one who doesn’t should.

Next time you have the chance, just sit and watch the world go by out of the window. On the train, the plane, the car (unless you’re driving) or just out the office window.

And the world is like an apple whirling silently in space, like the circles that you find in the windmills of your mind.*

As things revolve and swirl, they always come back to the same reality. Time with my family, the birth of my children, joy of first steps, first words and that smile on everyones face when I get home from a trip away.

The dead pan way my youngest told me my father had passed away. Not because he wanted to be the first to tell me (he wasn’t) but because he thought he could make it better by being the first person to give me a hug.

My windmills take me all everywhere. My actual past. My made up past and the past I sometimes wish I had had.

But they always remind me, that where I am, is the place I want to be and I wouldn’t change anything. Like ripples in a pond, once change could bring the whole thing crashing down around me.

“As this images unwind,
Like the circled that you find in the windmills of your mind.*

This picture reminds me of the time last year when I lost my phone. We were on holiday. Staying with my dad in the Isle of Man. The drill when staying with dad is that on the last day we change the sheets on all the beds and stick the old ones in the washing machine ready for the next lot of visitors.

On this occasion after breakfast I came looking for my phone, last seen on top of the bed. Nope. Nothing there. Only a newly made bed.

Hmm. Looked all over the house and tried ringing the phone but absolutely nothing. Then I had a thought. What if the phone had been mixed up with the sheets and was in the washing machine? We went out to the garage where said appliance resides and lo and behold, there in full view was the phone going round and round.

I almost said “in full glare of the media” when describing seeing the phone but that was no true. This is because the media need methods of recording to be able to apply glare and the device in question was the phone, presently, as we know, going round and round in the washing machine.

Now this is where the picture comes in. I had in mind the concept of sitting in front of the washing machine listening to my Spotify playlist emanating from the phone over my Bluetooth enabled headset. Perfectly feasible as the phone, being a Samsung Galaxy S7, is waterproof. Or so they say. It’s one of the reasons I bought it. Thing is I hadn’t had the courage to really test it out, even though the ad shows it being dropped in the kitchen sink. Now the decision was taken away from me and it was being tested in a real life situation.

I was quietly confident that the phone was going to be ok although I must admit there was an element of concern here. The problem with my Spotify/headphones scenario was that in order to access my tunes I’d have to open the App on the phone and that was not possible because of where it was.

Tbh that scenario didn’t even cross my mind at the time. I was more concerned with retrieving the phone and seeing it if still worked. I switched the machine off. Unfortunately just doing this doesn’t work because the door won’t open. I must have moved the dial on to the end of the cycle where it drains the drum and then had to wait a few minutes before the door would open. When it did open I am happy to report that the phone was amazingly in full working order.

Now coming back to this particular picture I do wonder what the kid in the red is listening to. Probably not the same stuff as my Spotify playlist. I totally get the hypnotic attraction of the washing machine. Very therapeutic. Might even try it myself sometime. Maybe.

← If a picture paints 500 words what would those words be?
psychotherapy and mind →
Copyright 2009 - 2018 philosopherontapwhere art collides