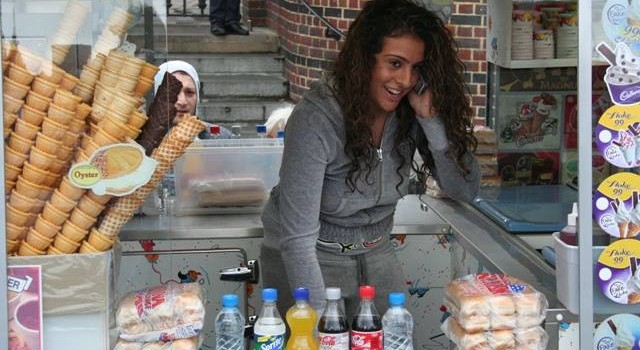 hang on I got a customer

So I said to him nah nah nah mate you got it all wrong. It was Nietzsche, it was Nietzsche wot said “Without music, life would be a mistake”. Not Nick Grimshaw. Ee must have been quoting Nietzsche. An anyway I’m still not coming wiv ya to Glastonbury. How dya think I can afford a ticket for Glastonbury wiv this job. I’d have to sell a lot of ice creams. I know I know I do like Adele. I think she’s great but do I really want to wade around in all that mud to get a glimpse of er. Nah nah nah mate. I’ll see you dahn the Crazy Parrot on Friday night if I can persuade the girls to come along.

I know, unbelievable innit? How they have the bare faced cheek to try it on.

So how’s that book coming along. Annals of Confucius. Yea that one. I thought it was a good read. Inspiring. Made me fink anyway. “Choose a job you love and you will never have to work a day in your life”.

Livin in cloud cuckoo land mind you. Snot as easy as that is it? Dya think I’m working in an ice cream van for the love of the job. The travel bit and the getting to meet people is all very well but it’s not quite what I had in mind when I left school. An it’s a real struggle to keep the weight off. I don’t want to have to go buying new clothes all of the time. On these wages!

Yeis yeis I am coming round to yours on Sunday. It’s my day off. He wants me to do some overtime but I’m not going to. He can find someone else to do it. I got to have a life you know I told im. E doesn’t like it but hard luck. I’ve been looking forward to havin a good natter. Specially when we are both readin the same book.

Nah I can’t do Tuesday. We’ve got to go and see my uncle Steve. He’s not been very well and mum wants to take some stuff round to his. Grapes and that kind of fing. She’s knitted him a scarf as well. I told her Uncle Steve must have loads of scarves. He’s a Chelsea fan. She wouldn’t have it. Took her weeks to knit the thing. It’s not even the right colour but she said he doesn’t have to wear it to a match. He doesn’t go that often anymore. Not since he had the problem. Anyway we’re going Tuesday night. Yea yea yea I know but you can’t tell em.

How’s Darren? Oo is he? Did he? That’s very good then. What are you going to wear? Oh yes you look great in that dress. You can wear the gold earrings he gave you last year for Christmas. And those red heels. Phoar. I can just see you now.

Hang on I’ve got a customer…