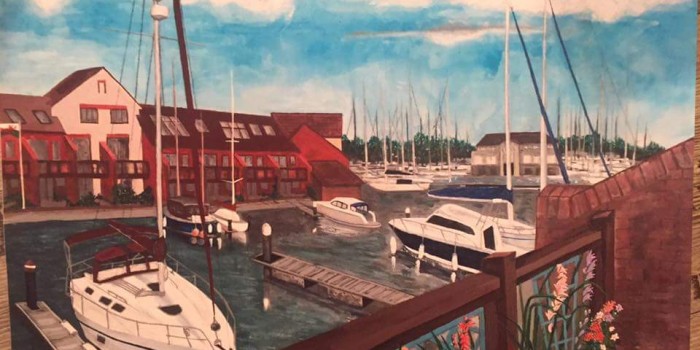 gateway to the world

Port Solent Marina doesn’t really give you a feel for the history of the surrounding area. Home to the British navy since the Middle Ages I take the opportunity to quote from Wikipedia:

“The mouth of the harbour provides access to the Solent. It is best known as the home of the Royal Navy, HMNB Portsmouth. Because of its strategic location on the south coast of England, protected by the natural defence of the Isle of Wight, it has since the Middle Ages been the home to England’s (and later Britain’s) navy. The narrow entrance, and the forts surrounding it gave it a considerable advantage of being virtually impregnable to attack from the sea. Before the fortifications were built the French burned Portsmouth in 1338. During the civil war parliamentary forces were able to carry out a successful cutting-out expedition within the harbour and capture the six-gunned Henrietta Marie.”

This picture by Jen is the view from our friend Kev’s balcony in the marina. He has a private mooring but no boat. If I lived there I’d buy a boat. Half the expense of running a boat is having somewhere to keep it. It might be interesting to plot where the yachts from Port Solent Marina set off to. Do they go around the world?

Not sure the ones in this picture are big enough for that sort of thing. I quite like the idea but there are barriers to making it happen. I’d need to learn how to sail a boat and be prepared to take a few months off to make the trip. My wife would also have to buy into the idea.

The boats in the pic look good for a trip to the Isle of WIght or maybe France. Pull in to a little port along the coast and head into town for an evening of steak frites nand vin rouge. Sounds perfect doesn’t it. Some croissants and a baguette frosh from the boulangerie for brekkie and head back across the channel for home.

Keep your eyes open for big boats going across your path. Don’t want any accidents now do we?

It isn’t hard to imagine boats setting off from Port Solent to pick up troops from Dunkirk. I don’t think the marina was there during World War 2 but you get the idea.

One thing I did notice about this pic is that there are no flags in sight. Perhaps boats only put flags up when they are going somewhere. You can’t hear it because there is no sound in this picture but the wind is blowing the stays against the masts creating quite a racket. Can get quite noisy when the Marina is full as it is during the summer months. You also hear the shouts of people calling across to other boats and to people on the shore. “Don’t forget the towels”, or the beer or some similar essential accessory for the perfect cruise.

Gotta go. The sun is over the yardarm.