The Casual Observer or Seagulls not Allowed 0 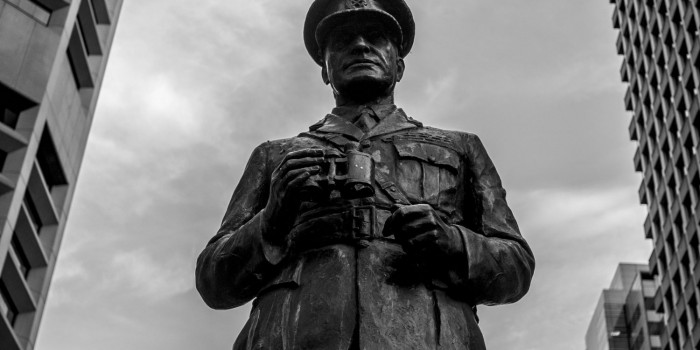 I only mention Lloyd George because there is a statue of him in the square in Caernarfon. When I was a kid I used to catch the school bus from the square and there would always be a seagull stood on his head. There is no seagull in this photograph but that might just be because Tom, the photographer, had shooed him away. Either that or he waited patiently for the moment when the bird had flown away.

Photographers have to be patient. Especially wildlife photographers who have been know to wait months before capturing that perfect shot of bird in flight with fish in claw, mating rhinoceri. You know the kind of stuff I mean.

On this occasion that level of patience does not apply. The statue is there already posing for the camera. All we need to do is wait for the bird to vanish. Vanish it has done. Gone. Gone in search of nourishment. Scraps of food discarded by careless office workers eating their sandwiches on a nearby bench. The occasional chip dropped by a schoolboy because it broke off the end of his fork. Rummaging in dustbins and causing a general nuisance.

We are not informed as to the identity of the person being honoured in the form of the statue. Clearly a military type as is more often than not the case. Just reward for leading the charge at the battle of XYZ. Probably. No horse on show so not a cavalryman.

Costs a lot more to have a horse as part of the statue. More metal and considerably more carving time on the part of the sculptor. The sculptor would probably appreciate the challenge. You don’t get asked to carve horses that much these days. Not as many of them around as there used to be. Horses that is. Probably sculptors too.

Maybe we have passed the heyday of both horse and sculptor. Definitely true for the gee gee. I digress.

The title given to this picture is The Casual Observer. I suppose it is possible for someone in such formal attire to approach situations casually. After all he has time on his hands. He is not going anywhere. The people he observes may not have the same luxury. Our office worker and schoolboy has to get back after the hour allocated for the lunch break or risk the wrath of supervisor and teacher. An hour is plenty of time to eat your packup and sit around for a bit relaxing, watching the world go by, taking in the sunshine etcetera etcetera etcetera. I’ve often thought of not going back and taking off instead for the coast. Never had the guts to do it.

I wonder what was in the sandwiches. I like ham myself…