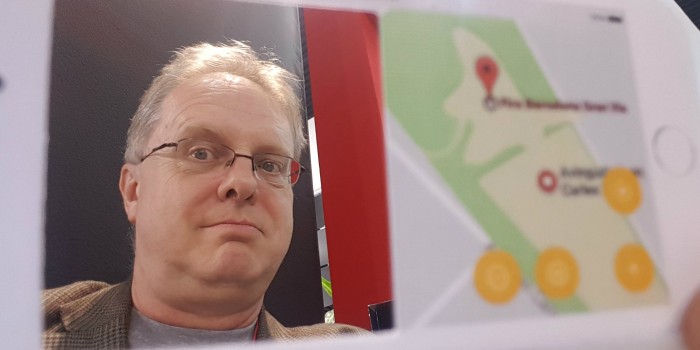 looking around me on the one carriage “train” between Lincoln and Newark everyone is appropriately dressed for February. Everyone that is except me. I am wearing a thin polo shirt and a lightweight jacket. I am off to Barcelona and didn’t think I’d be spending any time exposed to the British winter elements. This didn’t take into account the fact that the train was late and I spent more time standing on the platform that I had planned for. Didn’t matter.  🙂

Fields around are waterlogged in places with very little growth as you’d expect at this time of year. Sky is grey. I don’t mind leaving all this behind me for a few days. Barcelona, whilst an exciting city, won’t be particularly glamorous mind you. I’ll be spending most of the time at the Mobile World Congress trade show. The evenings will make up for it and I’m having breakfast with Jeff Pulver at 10am tomorrow.

I have a 40 minute wait in Newark so the slightly delayed departure from Lincoln doesn’t matter. I originally booked the train from Newark because there are more options. It was either going to be a lift off Anne, taxi or train from Lincoln. Anne is not available and figured

it wasn’t work paying the extra twenty quid to taxi it from Lincoln. Taxi back is quite likely.

Just had a great weekend. Tom and Joe were back for various activities. We had a JoeFest site visit and Joe separately had a Jazz Vehicle gig with John on Friday night and Pylons songwriting sessions on Saturday and Sunday. Had a very delightful late Sunday lunch. Roast port with crackling and all the trimmings. Opened a bottle of white wine to go in the gravy. The gravy didn’t need a whole bottle so I finished the rest of it. Sensible thing to do. Would have gone off!

Later on Sunday night we booked flights to go and see Dave and Cecile and George and Barbara in Geneva at the end of September.

On board the plane. Bored. Brought an FT and a classic car magazine from the lounge. Can’t be bothered to read them. Just waiting for the drinks service to start. I have been a good boy up until now. Saving myself for the evening ahead. However I consider the evening starts here really. Large G&T please and a glass of champagne.

I can see movement behind the curtains. Cabin steward is mixing my  drinks for me. Not really. Hopefully he is loading up the trolley though. Nice smell of coffee permeating the business class cabin. Coffee always smells better than it tastes. Not too many of us in  business class and I’m in row 4 so should be quick enough. Reminds me of last Friday night when we went to the Jazz Vehicle gig in Coleby. Anne and I had dinner with Nice and Terry beforehand. Joe came to see us and said we should get there by 7 as it was flying up. We weren’t going to make 7 so he took some coats and lay them on the pews (for the gig was at Coleby Church). Came back and told us we were two rows from the back. I didn’t think this was a particularly good spot until I found that we were also four rows from the front. It’s a small church.

Spotify is keeping me entertained through my Bose phones. They will also be serving afternoon tea shortly. Something to do. I don’t mind a sarnie and a scone. I have two small bots of champagne in preparation for it.

Still bored. Also although this plane has plenty of room to the side – they only use two out of three seats in business class – there isn’t much room to open the laptop.

afternoon tea consumed. Coronation chicken, prawn marie rose and ploughman’s cheddar sandwiches with a fruit scone, clotted cream and strawberry jam. Only tiny sandwiches but hey… Onto second bot of chaperone. Listening to Steed Life by the Crusaders. It’s one of my all time faves. About time they introduced internet connectivity on planes in Europe mind you. It would help pass the time away

Just passed Toulouse. Barca is about 170 miles away. Totes relying on the skipper for this info. Window shutter is down against the dazzling sun.

Interesting trip this. You get mostly suits working for large corporates who are bound by their corporate rules. Because they send so many people on these trips they insist on flying them all in economy class. This business class flight was more expensive than economy but only by a few tens of pounds so I considered it worth the investment. Maybe added 10% to the cost. God I’d hate to have to be suit again. I was one but gradually rebelled. I’d only work for a large corporate again on my own terms. it would have to be an extremely senior position where you could write your own rules.

I can now see a vivid red sky at night over Spain. Orange really but it fits the bill for nice weather tomorrow. I turn my back on the drab UK.

People passing me on the plane, heading back from the loos, don’t smile. I don’t suppose there is much to smile about cooped up in a tube at 30,000 feet. At least we are above the clouds and the sky is red, ish.

I’ve determined that this trip I will not be taking my laptop bag with me. I do have it but am leaving it in the apartment. All i need is the phone and a battery charger. Travel light. Enjoy the couple of days of MWC, if such a thing is possible. The evenings will be good. I have a couple of top nights lined up. No idea what I am doing during the day. Others have lined that up. I’ll find out when I look.

e could have been a monk in the old days:)

Now playing Love Is The Drug. It’s another fave. In fact I’m playing songs of my fave playlist. It’s called Tref’s Faves. On my third little bottle of champagne. 187ml That’s 3/4 of a normal bottle I will have consumed.

People watching me using my laptop will have no idea that this is not work. Work is a mugs game. Not saying it doesn’t need to be done. Just that it’s a mugs game. Unless you don’t think of it as work that is. You should enjoy what you do.

We are sinking lower in the sky now. A blood red element has been introduced to the palette. Along with some very dark not quite black colours.

As I recall Barcelona is a big airport. Lots of traveling to get to the exit. Guy sat next to me reckons if we land at 7.30 it will take me until 9pm to get the the apartment which is near the Sagrada Familia.

Listening to Moondance. Van Morrison. Brilliant. Suits three small bottles of champagne. The rest of the cabin is very quiet because these Bose headphones are brilliant. Really good for cutting out the loud and intrusive background noises of the plane. The only thing they have going against them is the fact that they are over ear phones and as such aren’t particularly good if you want to sleep in them. Having said that the over ear aspect is much better for comfort than the in ears.

10 minutes to landing. I’m off

Back on the plane headed nowf. Seems to be more room on thissun although the flight is full and they had problems getting all the carry on luggage stowed. I’m alright anyway jack.

May attempt to have a bit of a nap on the plane – it’s been three 1.30 am days on this trip. big nights out. Quite looking forward to having a drink of milk back in the UK. Nothing like British milk on the continent. Also I missed pancake day on Tuesday so I will have to make up for that. Tonight maybe.

Wondering what the inflight nosh is going to be. Had a couple of miniature croissants and a jam on roll in the lounge with an espresso and a glass of orange juice. Croissants were a bit sweet and the ham roll doesn’t replace a proper bacon sandwich. Not that you’d get a proper bacon sarnie on a plane anyway.

Looks like the Pyrenees down below. Jagged rocks you could cut yourself on. Careful there.

Drinking a restorative Fanta. They only come in small cans on planes but it’s having an effect.

Amazing how reviving a cup of tea can be. Although it is nice to go off to exotic places it’s always good to have your home comforts in this case represented by a decent cup of tea.

I will have to load up with stuff to watch when I head to Orlando later this month. Doubt they will have my kind of thing on the inflight entertainment system. Though I have no idea what is my kind of thing. When I land at Gatwick I have 45 minutes before my train goes. might even be able to  catch an earlier one who knows.y

lunch est arrived. salad by the looks of it. fine. had crunchy lamb last night. not sure what made it crunchy. it was too dark to be able to see. was meant to be crunchy. according to the menu. I’m avoiding booze this lunchtime. had enough over the last three days .

jaw just clicked when I was yawning.

Hello my friend it’s been along time
Where have you been?
What have you been up to?
Has your life gone well?
Do you have any regrets?
Come and drink tea
Tell me everything
It’s good to see you smile
There is no hurry to leave.

The Ace of Spades hammers against the sides of my head. Drums frenetic. Drummers must be very fit even though they send their working lives sat down. Gambling is for fools. I don’t want to live for ever.

These Bose headphones are absolutely brilliant.

There are now three persons in the queue for the toilet – wtf?

If anyone needs a landing card they will shortly be bringing them through the cabin.

We have two pilots. One has four stripes and the other two. The four striper has just brought out his empty food tray and is chatting to the stewardess. I can’t see her as she is stood behind the bulkhead. He has gone now. Think he went to the loo. Back now.

Sunny day in LGW but only 7 Degrees. I will have to stay indoors:) Not sure what the plan is for getting home. Probs a taxi from Newark Northgate.

Blog queuing for the loo wearing a Jack Wills t-shirt. I thought that was a kids brand? I’m wearing my Latitude tee.

Listening some of the lyrics of the songs on this playlist. Don’t normally do that. Subconsciously perhaps. They really are rubbish by and large. Pandering to the majority.

Just flying over the Isle of Wight en route to LGW. Cool. We are following the South coast towards Brighton. Should land on time. Scheduled 12.30 and eta is 12.20 which means may be at the gate for half past.

They need to start equipping aircraft with internet access. Do it already in the US of A. Apaz.

Shepherdess Cafe Shoreditch – have breakfast there.

Plane is banking to the left. Eeoowww. Fluffy cumuli float.

Posted on March 2nd, by Trefor Davies in travel.
No Comments
0
Tweet