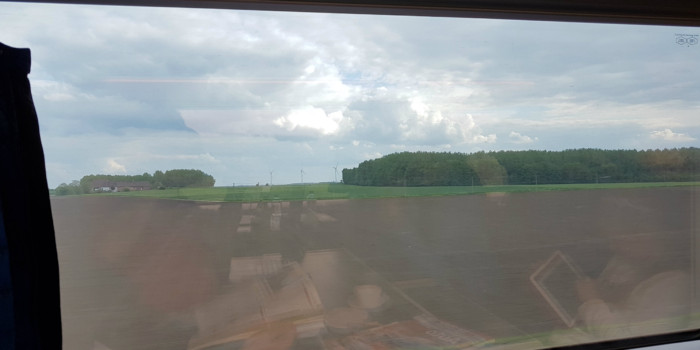 Offline again. Eurostar. Only have a partial Spotify library since I switched SD Cards in my phone. On the plus side I haven’t noticed videos being unresponsive anymore, or at least slow to respond. On the minus side I forgot that I needed to download all my songs. Started doing this but got a long way to go. At least I have a Satchmo album to keep me entertained until connectivity returns.

It has now but bandwidth is normally rubbish so I’m going to type a bit and then post these random ramblings. As I head for the border the clouds seem to be returning to England. Don’t know about Wales and Scotland but experience suggests that the likelihood is they will be the same.

Strumming a bit of Edith Piaf right now. I found out about EP when I first moved to Lincoln. I remember it was a beautiful weekend and I’d bought a bottle of red from the Portuguese guy in the Grapevine off license on Burton Road. He told me to let it breathe for an hour or so. There was nobody else around that day so I fixed myself some steak and chips and consumed the bottle of red to the accompaniment of Edith Piaf and Louis Armstrong. Perfect laid back summer.

Thats where we need to get to. The no responsibility chilled out plateau of youth.

I can’t believe how pants the mobile connectivity is along the UK section of the Eurostar line.

Woman sat opposite has just put a coat on over shirt and cardigan. I’m sat here in a t-shirt.

I keep looking at the mifi to see if any bars have appeared. A forlorn hope.

Summertime is on. The ultimate in laid back cool. I feel as if I want to shut my eyes and float out of my seat

Woman opposite looking bored now. Daughter is engrossed in her iPad and the husband is buried in Auto Gids car magazine looking at listings.

Can’t quite see what sort of car he’s looking at. It’s all in Flemish, or Dutch anyway. Might as well be Greek. I’d work on today’s greenhouse vid but it doesn’t need anything doing to it. I’ve even left the bit in where I was making Darren move back away from the camera. Just waiting to get to sensible connectivity at the hotel.

Just noticed he has a matching blue coat to hers. He’s put the mag down and is trying to nod off. She’s picked it up. Nice to have mutual interests like that…

Have switched off mini and trying the train wifi. It uses cellular connections so unlikely to be much better. Especially in the tunnel. Might succumb and head to the bar for something to do.

Have moved to something livelier – Summertime Throwbacks album.

Just declined the standard onboard fare in favour of a can of Kronenbourg. It is a Bank Holiday in Belgium after all. Meeting Andrea at the hotel at 7.30pm to go for a meal. No point in filling myself with cardboard quiche and rice salad and spilling the modules frites, or whatever lies in store.

I’m staying at the Hilton Grande Place. It’s about the cheapest I’ve ever seen it – the EC lot are all away on holidays or similar. As a Hilton Diamond member they have already upgraded me to a King Exec Junior Suite. Makes life easier.

Interesting speeding through the flat countryside en route to Brussels. Big WW1 battleground of course. You do occasionally get a glimpse of a cluster of war graves. Symmetrical. Orderly in death and quite unlike the chaos that was almost certainly the environment in which they died. We don’t know how lucky we are. Live life to the full. It’s the appropriate way to honour the war dead. I look out of the window and imagine ranks of soldiers marching to the front.

This offline state has meant that I can’t do any work. Was sort of thinking of preparing for tomorrow’s meeting. Already done most of it but you can never do too much preparation innit.

Spotify is slowly downloading. There is a trickle to mobile dat making it through. As if it was escaping through enemy lines:)

The country side is full of greens and browns about to become greens. The cows are sat down. Cmon ladies, up you get. Can’t having this pessimism.

Bit of Abba on now. I accidentally clicked on my fave’s playlist when checking how many songs had downloaded.

About to arrive at Lille. I think it’s only 30 mins or so after that.

Little ole Lille. Underground station. Not particularly memorable or grand. Crap really. Maybe there is a grand old station above us. Lille Centrale.

She is now doing her lipstick. Occasional bursts of connectivity coming through. One or two Facebook Messages and Slack.

I think I may soon be able to upload this.

Posted on May 1st, by Trefor Davies in thoughts.
No Comments
0
Tweet