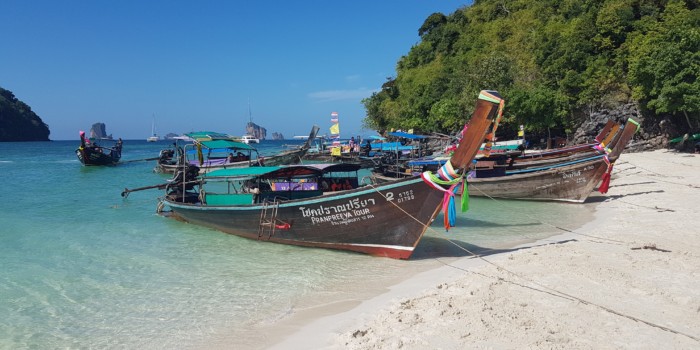 It is with a heavy heart that I announce the loss of the notes I had been making in preparation for this post. I had been spontaneously scribbling thoughts down on a piece of hotel notepaper, capturing the atmosphere and sounds of the beach as they happened.

You would have felt as if you were there, the sun on your face with the sounds of racing longtail boats a short distance away, sharing with me the joy of snorkelling alongside exotic yellow tailed fish in the warm blue waters of the Andaman Sea.

I do have plenty of inspirational photographs and videos to which I could refer. You did not need to know that my notes were lost. I feel however that this is an issue of creative integrity. I would have known and I would have known that the piece is not what it could have been. The sound of the American singer in the bar as we drank chilled bottles of Singha beer would not have felt the same.

The visions of coconuts washed ashore on the palm fringed pristine white sands will have to be left to the colourful travel brochures and exotic magazines of your dentist’s waiting room. Ditto the fresh barbecued fish, the satay skewers and the newly tapped coconut juice.

The hotel pool, long guarded by early rising tourists, was a sanctuary when the sweaty heat of the day called for a retreat. The visions of us sipping exotic cocktails in the shade of the wet bar will unfortunately have to remain firmly in the recesses of your own imagination.

I will leave you now, subdued and resigned to never writing the post. It is time to move on…

Posted on January 27th, by Trefor Davies in 57 Varieties.
No Comments
0
Tweet