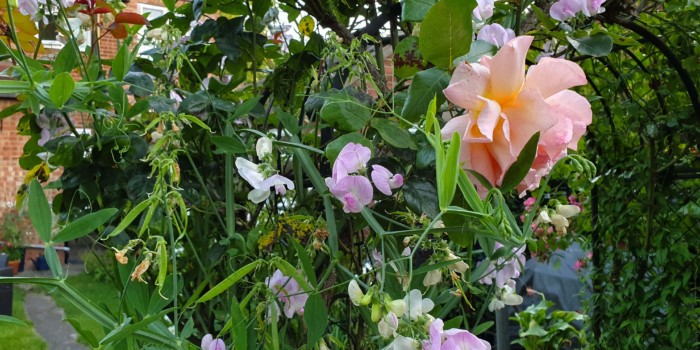 Another early morning in the garden. We slept on top of the bed covers last night due to the heatwave the country is experiencing. Today is expected to be hotter. We will be in the air-conditioned cocoon of the jag for a chunk of the afternoon en route to Liverpool. The hotel in Liverpool will have ac natch though Anne doesn’t like it on at night so we will have to see.

I note that the arch in the garden now has flowers growing around it on both sides. At the start of the summer it had a rose on one side only but it has filled out nicely. In fact I think we have the best floral display we have ever had this year thanks to Anne’s continued efforts. Watering has become increasingly important.

The fridge in the garden office makes a noise, as fridges do. It isn’t an intrusive noise but it is there. It’s a compromise. If you want to have a fridge in the office then you have to put up with some noise but silence would be better. I’m opting for the cold water and the occasional cold beer, mostly for show. Certainly a cold pint of milk would be appropriate. One of the secondary objectives of the trip to Liverpool is a visit to John Lewis to kit out the office. Kettle, coffee maker etc. A bit of fun shopping with Anne. We very rarely go shopping together. It doesn’t work 🙂

There is a hedge sparrow foraging on the deck in front of me. With the double doors open it’s almost as if the office is outside. Did it notice my presence? I’m sat here quietly tapping away. An empty beer barrel stands on the deck, left over from the BBQ. I’ll have to take it back sometime but will have to wait until next week. There’s a fifteen quid deposit on the tap!

Posted on July 25th, by admin in 57 Varieties.
No Comments
0
Tweet