You can bet yer booties that Pelham Bridge made a massive difference to traffic flow in down town Lincoln. It’s bad enough these days with the railway crossings that we have but without Pelham Bridge there would be even more.

Pelham Bridge was opened by the Queen in June 1958. It was chucking it down – typical British Summer weather. In those days it would have been horse and cart, or maybe the Model T Ford. Had cars even been invented? I dunno.

Anyway Pelham Bridge was built to provide a useful viewing point for train spotters wanting to watch the steam trains at Lincoln Central Station. Trainspotting was a perfectly acceptable hobby in those days and was something to be encouraged. Nowadays trains all look the same and have no romance. Anyone interested in trainspotting needs their head examining. Probably other parts of the body too.

In 1958 Pelham Bridge was the first of a series of planned constructions designed to alleviate the traffic in Lincoln. The others are still waiting to happen though we do now have the bridge at the far end of the Brayford which is very handy. It was built for people to have a good viewing point for looking down at the boats and to make it easier to get to the Hub pub on the other side of the water.

There isn’t much attractive about Pelham Bridge. It’s a bit of a concrete jobbie and can get very windswept when you walk over it which doesn’t happen very often. I’ve seen people do it though. On their way home from Sincil Bank maybe. I’d be inclined to cross using the pedestrian bridge nearer the Railway Station. It’s more direct.

I wonder how many bridges the Queen has opened since then. Loads. She specialises in that kind of stuff. Means she can reuse her speech. Just changes the word bridge to school, hospital or other civil engineering project.

Sometimes she delegates smaller openings to Phil the Greek but when she did Pelham she was still fresh on the throne and was doing most of them herself. I wonder if she remembers doing Pelham Bridge. It was a long time ago now. It was opened in 1958 and it was raining.

The bridge was built by the villagers many years ago. It was well built of stone and brick and has stood the test of time. If anything its aged and weathered look improves the aesthetics of the bridge which is popular not only for the convenience it provides as a river crossing but as a picturesque addition to the head of the valley. The bridge god is quite content to live under the bridge and is equally happy to share the space with the river god who could live anywhere but likes the feeling of enclosed shelter the bridge provides.

There is no animosity between the two gods who as well as sharing the same space under the bridge also share the same community of worshippers, the descendants of the good folk who built the bridge.

The gods that live under the bridge have a limited set of responsibilities. The god of the bridge is solely responsible for the safe passage of people and animals across the bridge. The god of the river has a wider though similar set of duties. He looks after the wellbeing of the river, the animals and fish that live in and around the river plus to a certain extent the fertility of the meadows either side of the river. This duty to maintain fertility is shared with the rain god and the sun god who are mutually exclusive and do not talk to each other.

The river god is not always a nice guy and has been known to flood the village causing distress to its inhabitants but these occasions are rare and quickly disappear from the communal memory. Most of the time he is a good god.

The villagers have many other gods that they worship. We will from time to time take a look at these other gods so that over a period of years Philosopherontap will become a useful resource for those needing to know about the gods of various places. Although some gods have names the river god and the bridge god are not in their number. 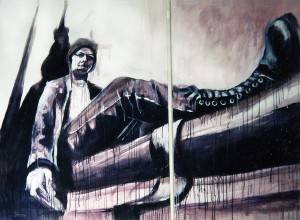