This is only a temporary state of affairs. I have to celebrate quickly. The state of having a completed jobslist is ephemeral. It is actually a highly unstable state. One liable to self destruct randomly in accordance with Heisenberg’s own uncertainty principle. Anne is due back late tonight. There will be a new jobslist by the weekend, on the back of a newer envelope. Let us sit in a quiet moment of contemplation…

the bathroom radio is kaput btw. not repairable, or certainly not worth the effort.

sort stuff in garage left over from jeep

knock dents out of tin trunk

get rid of  receipts from kitchen shelf

boxes back up on shelf

Hanging a picture in the kitchen. Then we can nip to Waitrose for a few choice morsels to accompany tonight’s pulled pork. A bottle of red wine stands patiently on the worktop.

Jobs all done. Beautiful day for a walk into the Bailgate.

Anne is away. At her mums. Fair play. Got to get the old dear to the shops for a bit of retail every now and again. Stock up. Knowworramean.

These occasions where us lads are left to fend for ourselves, are not exactly looked forward to but we do try and make the most of the opportunity. Lunch is procured from Waitrose where there is no real limit on what may be put in the shopping trolley. A bit of a treat to make up for the fact that mum is not on the scene.

The jobslist becomes a more detailed affair. On one side sits the day to day mundane stuff. Fix drawer, clear up wood left by back door. Stuff like that. Opposite is a schedule for what the kids are doing/need in place. Bus fares required with sum of money identified for each offspring, lift from music exam, pick up from basketball after school and so on.

Some of the normal smooth running of the house temporarily disappears. This morning I realised that no one had put the (full) dishwasher on before going to bed. Normally it happens by itself, seemingly. Text messages are exchanged across the Pennines (Anne’s mum lives in Bromborough on the Wirrall). “Where do we keep the envelopes?”, “where are my hockey shin pads?”. You get the drift. We always find them, usually where the have always been or where we left them.

We do nowadays make an effort to keep the house tidy when Anne is away. It’s all relative. When she comes home the house gets another tidy up but hey, we do try.

This morning, Sunday morning I was lying in bed without a cup of tea. I don’t normally have a cup of tea in bed when Anne is away. That isn’t because she always gets up to make it. I make a point of doing my fair share of tea making in the morning. It’s just that there seems to be less incentive to make the tea if I’m just making it for myself.

This downside is offset slightly by the fact that I can keep my own time in the mornings when she is not around. If I want the radio on at 6.30am on a Sunday to listen to On Your Farm or whatever it’s called I can. It’s one of my fave progs but I rarely get to hear it because 6.30am doesn’t normally exist on a Sunday.

This morning was one such day. I drifted in and out of sleep during the farming, a programme about a fish farm somewhere, and then the Sunday service which when I realised was on got switched off. Not my thang. During one of my periods of awakeness came a sudden realisation. “Slow cooked pulled pork!”. I was meant to get the joint ready and stick it in the slow cooker. It was 8.30am. I still had time.

The light came on along with my dressing gown and slippers and down to the kitchen I went. The garlic and onions were chopped, cumin and cinnamon ground – I couldn’t find any already ground stuff – dark brown sugar mixed with chili powder although I kept the latter to a minimum. I didn’t trust the quantities in the American recipe. The pork was smeared with the chilli/sugar/cinnamon/cumin mix and shoved in the slow cooker on top of the garlic and onion together with a soupcon of chichen stock (Anne as you know comes from Merseyside where there is no letter “k” in chicken).

The slow cooker slowly in action I cleared up the mess (yes) and turned my thoughts to breakfast. This is when I realised that the dishwasher was full and hadn’t been switched on. Breakfast could wait. I switched on the dishwasher and treated myself to the luxury of writing this piece for Philosopherontap.

As I write there are signs of life. Only from kid4 who didn’t go out last night. Kid3 is in a band and he had a gig last night. Someone’s 21st birthday party at the Tower Bar at Lincoln University Students Union. As kid4 strolled into the kitchen looking for sustenance my attention was drawn to five cans of lager on the kitchen table in front of me. Obviously a good night. Musicians need time to unwind after the adrenaline of the gig. Phil the bassist is crashed in our spare room. Must have been his beer ;).

The cans are featured in the photo that accompanies this post. Note the low winter sun streaming through the south facing kitchen window. That’ll do for now. Catch ya later… 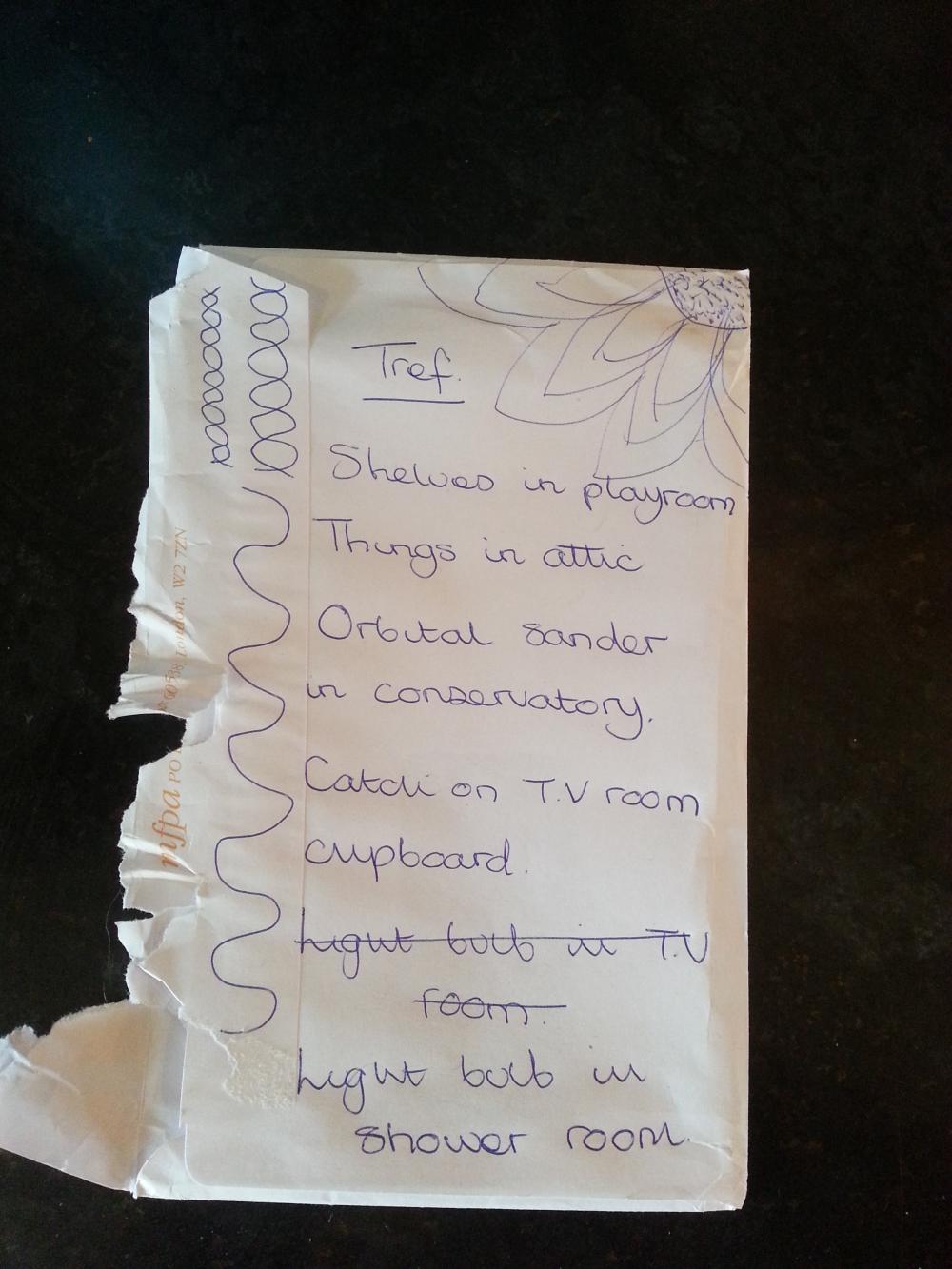 There is something practical yet sinister about a jobslist. It’s all about control. String-pulling from afar. Whilst I say that it is also true that I won’t do anything if it isn’t written down. This stems from a time where jobs would be fired at me as if from a verbal machine gun. I couldn’t cope. Having finished one job another would appear. It was very dispiriting. A bit like climbing a mountain. You reach one rise only to find there is another ahead of you.

To avoid this scenario I began to insist that the jobs be written down on a list. That way I could gauge the scope of it all and apportion time as appropriate. This worked but I quickly found that having crossed one or two off the list, more jobs would appear. This was no different to the old way when nothing was written down. It was in effect an endless list.

I put a stop to that. No new jobs could be added until every one on the existing list was crossed off. That way a sense of satisfaction could be reached when all the jobs were done. New jobs could go on a new list after a suitable period of recovery. This intermission would also allow me to bask in the glow albeit short that came from completing all the jobs.

So whilst in one sense a jobslist is about one person controlling another it is also a means of control for the person doing the jobs.